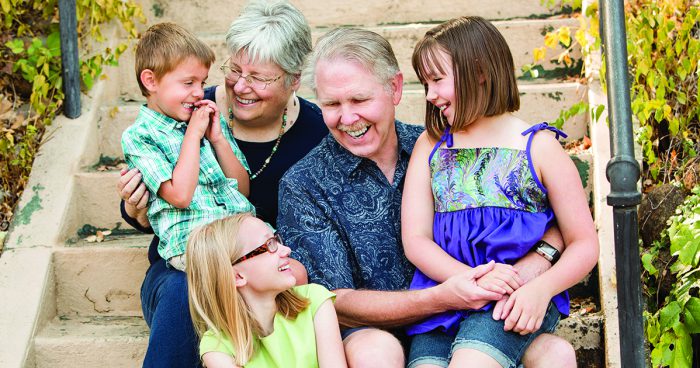 Glaucoma directly affects more than 3 million Americans today. The disease doesn’t just affect those with it, though. Friends and family, and any supportive loved ones, join the battle to try to slow the “sneak thief of sight” right alongside them.Although glaucoma causes permanent vision loss and even blindness, early detection of the disease and the right support along the way can help prolong the impact of the disease. While statistics on glaucoma may seem scary, managing the disease doesn’t have to be, especially with help.Glaucoma hit close to home for retired nurse Kris, as both her husband and mother-in-law were diagnosed with it. She shared her story of compassion and hope as she supported them in their fight against the disease.“I was a caregiver for my mother-in-law when she was diagnosed with glaucoma,” Kris said. “She had no symptoms of glaucoma; it was discovered during a routine eye exam with her optometrist.”

Kris’ mother-in-law was put on eye drops initially, but needed laser surgery too. The battle had begun, and it required two surgeries and a whole lot of drops she hated taking to make progress.

“Her pressures were not well-controlled,” Kris said. “She did lose some peripheral vision over the course of two years.”

Treatments helped, though, and Kris’ mother-in-law was able to live her final years relatively free of dramatic changes due to glaucoma because of frequent checkups and administration of medication.

“Her quality of life was not impacted by loss of vision,” Kris said. “As long as she could watch TV, read, play board and card games, and do puzzles, she was content. I helped with instilling drops initially, but she eventually was able to put them in without difficulty.”

Kris’ mother-in-law died from natural causes at the age of 89, three years after being diagnosed with glaucoma and without determining whether there was a trend up or down for her pressures. But Kris said it was a manageable time all around.

“Other than the inconvenience of remembering to take the medications at regular times and the frequent visits to the doctor, her glaucoma was not difficult to live with,” she said.

The challenges for Kris’ family related to glaucoma continued, though. Kris’ husband was diagnosed with normal-tension glaucoma in his left eye five years ago. It was discovered during a routine appointment with his optometrist.

“The optometrist noticed a problem with his optic nerve and referred him to an ophthalmologist immediately,” Kris said. “We had never heard of normal pressure glaucoma before. It apparently may be related to the fact that he has an irregular heartbeat, congenital aortic stenosis, and a congenital abnormality of the tricuspid valve. Or not, as very little is known about this type of glaucoma.”

Laser surgery opened up the angle and he uses a type of eye drop regularly. He administers treatment to keep the eye pressure as low as possible, sees his ophthalmologist twice a year, and has the visual field test yearly.

Now at the age of 68, due to the early detection of the disease and rapid treatment of it, Kris’ husband has not experienced any loss of vision.

“At first, we both had feelings of anxiety and fear over what was happening,” Kris said. “But at this point, since he has not experienced any further progression of damage to the optic nerve, we only think about it when he needs to fill a prescription or make an appointment for an exam.”

The learnings from their experience with Kris’ mother-in-law helped with the initial anxiety of his diagnosis.

“Like his mother, the biggest issue is remembering to take the medication,” Kris said. “But he has never had pressures that were considered high, or even in the upper range of normal—the need to be exact isn’t as critical.”

Both experiences have left Kris with a stern warning for anyone else who may be in a similar situation—and may not even know it. In fact, 50 percent of people with glaucoma don’t know they have the disease.

If you haven’t had your annual comprehensive eye exam, schedule an appointment. The experience Kris’ family has felt is not uncommon, so take precautions for your family, too.

“There is no reason to fear glaucoma,” Kris said. “Even laser surgery is routine, and there is no discomfort before, during or after. Delaying diagnosing and
treating glaucoma, however, can result in permanent damage to vision. Get an eye exam.”

By Patrick I.
vsp.com

Four Health Conditions That Can Lead to Vision Loss
Glaucoma: Early Detection of ‘The Sneak Thief of Sight’